As I read this essay on “The Death of the Cyberflâneur” by Evgeny Morozov who argues that the Internet lost its early quality of leisurely strolling and encountering the unexpected, I kept thinking about how this did not fit my experience. While there are many parts to Morozov’s essay –some of which I am not going to discuss here at all– I want to focus on the idea of “wandering around” the Web and encountering the unplanned in light of the emergence of the “social web”. For me, the social web has greatly increased exactly this quality of the Internet –encountering the unsearched and the unplanned– and I don’t believe this is because I am exceptional but rather it is because connectivity through people –the social web– yields more diverse and surprising encounters than mere connectivity through topics or information-the early Internet.

To go back to Morozov’s essay: there are two parts to his claim why the Internet is less about the aimless encounter: first is empirical, and the second is structural. Here’s the empirical argument:

Something similar has happened to the Internet. Transcending its original playful identity, it’s no longer a place for strolling — it’s a place for getting things done. Hardly anyone “surfs” the Web anymore. The popularity of the “app paradigm,” whereby dedicated mobile and tablet applications help us accomplish what we want without ever opening the browser or visiting the rest of the Internet, has made cyberflânerie less likely.

First let’s get some numbers out of the way. Is it true that “hardly anyone “surfs” the Web anymore”? In a recent (December 2011) and nationally representative survey, Pew Internet found that 74% of all online adults answered “yes” to the question if they do go online for “no particular reason except to have fun or to pass the time.” I don’t think this is blip. In my 2010 surveys with college students a whopping 77.9% said “very often” when asked how often they went online “for no reason at all”—and I’ve probed this question many times since 2005 and I have similar numbers for all the years.

I’ve asked Evgeny Morozov about his data and he pointed to a Microsoft advertisement survey—the survey had scant public information but actually shows a 4% increase in amount of surfing from 2007 to 2010; and surfing remains the second most popular activity after email. Morozov also referred to the famous Wired article which argued that the “The Web is Dead.” I’m sympathetic to the argument in the Wired if interpreted structurally: that the Web is being taken over by “walled gardens” like Facebook and single-purpose apps. Data-wise, though, the Wired piece does not speak to this argument of encountering the unexpected or wandering around (it’s comparing peer-to-peer and video traffic to “Web” traffic, for example). (Also, see this critique.)

So, let me consider structural argument which I find a lot more interesting. Here it is in a nutshell:

As the popular technology blogger Robert Scoble explained in a recent post defending frictionless sharing, “The new world is you just open up Facebook and everything you care about will be streaming down the screen.”

This is the very stance that is killing cyberflânerie: the whole point of the flâneur’s wanderings is that he does not know what he cares about. … Compared with Facebook’s highly deterministic universe, even Microsoft’s unimaginative slogan from the 1990s — “Where do you want to go today?” — sounds excitingly subversive. Who asks that silly question in the age of Facebook?

I have to say that at face value, this is an attractive argument, and one that has been echoed by others: the “filter bubble” or the “daily me”—and indeed raises deep questions about how to design for serendipity:to find not merely what we are looking for, but to wander and to stumble upon things a la the flâneur, to encounter the unexpected, to savor the surprise.

However, in my personal experience, platforms like Facebook and Twitter have greatly increased the amount of unplanned and interesting information I encounter exactly because they are person-to-person spaces rather than information-spaces. Online, I interact with people with whom I share at least one strong interest–but thanks to the social Internet, I am not exposed to just that limited topic but the much wider universe of what my friends share. And this is always much broader than the narrower affinity that first connected me with that particular person.

The trick to understanding this effect is to understand that people’s affinities don’t lump neatly, nor do they ever overlap completely. In other words, we are, fortunately, not clones of each other. Stereotypes work as broad generalizations at the aggregate, statistical level but break down spectacularly at the individual level: show me a stereotypical “X”, and I’ll show you traits he/she does not share with other stereotypical “X”s.

For example, I have strong interests in social impacts of technology, human rights and democracy and the Middle East–and often make friends based on that basis. However, I have other strong interests which do not fit into any of those categories—and, crucially, so do my friends. Social media thus exposes me to other interests of my friends, and exposes my friends to other interests of mine—and I am surprised everyday by the richness and diversity of these encounters. A friend I met because of shared interest in the emergence of the Internet and the Middle East may pleasantly introduce me to a music genre I dabbled in but never had the time and expertise to dive into. From another, I encounter the intricacies of representing light on metallic surfaces on oil paintings. Somebody shares an article on how bilingualism changes the brain.  Baby pictures, sunsets and cat videos, of course, also pass through my stream.  But along musings on nature parks in Latin America. There is a new restaurant in town—well, in a town I’ve never been to. It goes on and on and on in a great deal of richness, diversity and complexity.

In fact, encountering things I did not explicitly care about happens to me significantly more than the days I had to click-click-click my way around “cyberspace” because as much as I thought I wandered around, I could never wander around within the richness and depth of my encounters through the social web.

At this point, you might say that I have interesting friends and that is an anomaly. Perhaps, but that is not the point. The point is that I have friends who are not clones of me but have enough similarity with me that they introduce me to topics that I did not know I was interested in, but may plausibly be, if it just popped in front of me. This is likely true for most people for structural reasons.

Crucially, my online encounters introduce me to spaces that are both adjacent to (interests of people somewhat like me) but also far (not my interests) from me.  In the old days of seeking by information, I was more likely to encounter only information I was seeking (Duh) but not manage to get too far unless I truly started clicking randomly–but how do you do that? Search for “random”?  In the new era of connecting to people, I am exposed to a lot more because “people” are a lot broader than “categories of information” which are, by definition, narrow.

To put an empirical point on this, look at this striking finding from the latest February 2012 Pew survey.

It is commonly the case in people’s offline social networks that a friend of a friend is your friend, too. But on Facebook this is the exception, not the rule. A fully connected list of friends on Facebook would have a density of 1 (everyone knows everyone else). The average Facebook user in our sample had a friends list that is sparsely connected. As an example, if you were the average Facebook user from our sample with 245 friends, there are 29,890 possible friendship ties among those in your network. For the average user with 245 friends, 12% of the maximum 29,890 friendship linkages exist between friends.

For those of us familiar with research on this topic, this number, 12%, is very striking. Most of the time, it is fairly safe to assume that a person’s friends form “close triads”—people you know also know each other–and this creates a structure that looks like a triangle: everyone is connected to everyone else. What this 12%  number is saying is that on Facebook, your Facebook friends are almost never friends with each other, i.e. rather than triangles, they form “open triads”. People in closed triads tend to be more similar each other either due to origins of the connection  (living in the same environment) or due to convergent homophily (people exposing/converting each other through multiple encounters over time). 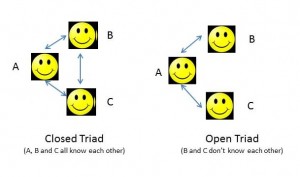 Finally, here’s the best empirical finding on this topic: Look at this striking study of 250 million people on Facebook [in a true experiment, no less] by Eytan Basky explained here:

In other words, platforms like Facebook connect you with people who connect you with information you simply would not have encountered yourself—and these connections happen especially through your weaker ties who, structurally speaking, are more likely to be in open triads with your other friends, i.e not friends of your their friends.  I suspect this may be even truer for Twitter.

I don’t deny there is something to the argument that the shift to walled gardens comes with particular threats, but I disagree that the shift to the social Internet kills diversity, surprise, or richness. An Internet that is collection of sites which brings together, say, “people interested in model airplanes to talk about model airplanes” is going to be a lot less likely to expose us to the unexpected than the social Internet which connects us to people in their fuller richness.

17 thoughts on “Is the Social Web Less Surprising? The Internet of People and Social Flâneurism”